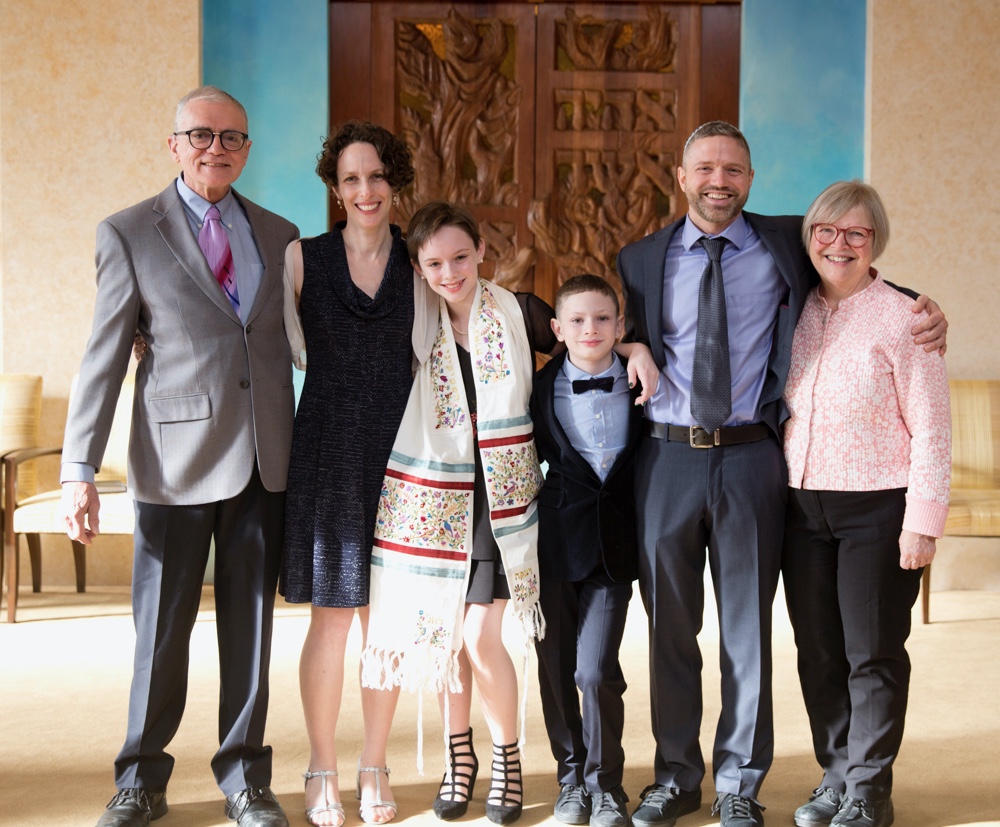 I sat in the Yom Kippur service listening to a baritone voice singing, “Ashamnu, Bagadnu, Gazalnu, . . .”

The voice belonged to my son, Jim.

Jim was leading us in confessing that we have trespassed, we have betrayed, we have stolen, we have slandered. The list is as long as the Hebrew alphabet.

I bowed my head and gently beat my chest the way he did. It may have been as much the fact that it was my son leading us as it was the meaning of the prayer that touched me.

Some people around me could recite the words by heart. My Hebrew is not good enough to keep up even with the slow recitation of the words. However, I was not alone in my awkwardness.

Around me were Jews who had grown up with little relationship to Judaism. There were also people like me who are part of interfaith families. Most of those people married into their interfaith family.

In my case, my son is married to the Rabbi. I was sitting next to my grandson, Ziv. His other grandfather, a retired Rabbi and his other grandmother, the daughter of Holocaust survivors, were on the other side of him.

I don’t know what their experience was, but mine was a deep encounter with two things that I had never experienced in worship before: lamentation and timelessness.

It reminded me of something I heard 50 years ago.

When I was in seminary studying for the Methodist ministry, I took a class called “Black Theology.” Our teacher, Dr. Jefferson, had attended his son’s best friend’s Bar Mitzvah the previous weekend. He said, “I learned Jews are like Black Folks. They enjoy their religion.”

I winced. I was the only white student in the class. I knew what Dr. Jefferson was not saying when he spoke of Jews and Black Christians enjoying their religion. They were not like White Mainline Protestants who rigorously limit their worship to one hour each week. Who think any emotion beyond an appreciative chuckle at the preacher’s joke or a serious expression when saying the Lord’s Prayer is a sin.

There are reasons for that emotional restraint. My own Methodist tradition tried to make faith in God possible for people living in a Twentieth Century culture dominated by science and reason. There is also something to be said for equanimity — staying peaceful, or at least keeping a stiff upper lip — while riding out life’s storms. But that strength can lead to a denial of the dark side of life, and a consequent inability to celebrate life’s joys.

I knew we lacked something my fellow Black Theology students called “Soul.”

Because I was shaped by White Mainline Protestantism, I have found my encounters with Judaism to be both jarring and delightful, because they are soulful.

Soul is what I encountered in that Yom Kippur service.

The Yom Kippur service dealt honestly with the dark side of life. It was not just intellectually honest. It was also soulful. That soulfulness released something in me. It meant that I could be honest with God about the grief, failure, and brokenness in my own life. I could face the fact that I don’t know when or how I will die.

The Rabbi, Rachel Goldenberg, had created this worship out of her deep appreciation for the spirituality of the Jewish tradition, her love of music and art, her passion for social justice. Those are the things that help bring together many different people into a community called Malkhut that she is gathering in western Queens.

The service went on and on. I checked my watch after an hour; then after 90 minutes. Then I stopped looking. I stopped caring. My soul doesn’t care about beginnings or endings; it lives in the moment. The service took me into the timelessness that may be a taste of eternity. As much as I wished to slake my thirst and eat as the service came to an end, I was sorry to see the gates of heaven close.

I encounter this soulfulness, not just in formal worship, but in my other encounters with my interfaith family.

Once, Rachel’s parents, Joyce and Irwin Goldenberg visited us when we lived in Cleveland. We are not just related. They have become our very good friends. No one wants to hear them talk about their grandchildren as much as we do!

We decided to take in a concert of Afro-Cuban music at the Cleveland Museum of Art. We sat in the auditorium listening to the horns and steel drums playing irresistible rhythms of joy. Suddenly Joyce rose from her seat and began to move with the music. Jacquie joined her in a heartbeat. Irwin and I looked at each other, but he, much more used to being with Joyce than I was, shrugged his shoulders. He got up and swayed to the music as well. Here I was, surrounded by Midwesterners, many of them raised as I had been to avoid any public emotion. What would I do?

I decided, finally, to join my family and got up and found, for the first time in my life, that I could clap in time with the music. Slowly other people rose around the auditorium. Soon, Joyce and Jacquie turned and motioned me to get out of their way so they could dance in the aisle. I moved and then went back to stand in front of my seat as the aisles filled. But, I did feel strangely liberated.

That moment took me back to Jim and Rachel’s wedding. During the planning, I heard Joyce say that the thing that mattered above all else was the band.

I did not know what she meant until we filed down to the dining room after the wedding ceremony and we heard the klezmer music. Jacquie quickly jumped in and began to dance like I’d never seen in the 30+ years we had been married. I tried my best to join her and discovered that she had not danced like that because she had to dance with me. This dance was a free-for-all. Groups formed and dissolved to form new configurations.

I could dance like no one was watching; because no one was watching. By the end of the day, I had danced my legs off and my heart out. My body and heart had learned something about joy that all the sermons on joy, including my own, had never taught me.

I also discovered that day how soulfulness can connect us across our differences.

Before the wedding service, all the women in both families gathered in a large room with Rachel and all the men gathered with Jim in an adjoining room.

The tables were arranged in a horseshoe with Jim at the center of the head table. The best man and Rachel’s side of the family sat on one side of Jim. Jim’s brother, Matt, and our family sat on the other side. My father sat next to me. Dad and Mom were pillars of their little church in a small rural community. Just coming to New York City for a wedding was a big deal. That the wedding was taking place at Hebrew Union College was a huge culture shock for them.

Jim introduced all of the male guests to each other with a short anecdote about each one. When he finished, someone on the Jewish side began thumping a rhythmic beat on the table, and others began jumping up and stamping their feet in time, reaching out and taking each other’s hand.

I turned toward my father, a dairy farmer and electrician who had lived all his life in northern Appalachia. Where he came from, guys didn’t hold hands and dance together.

So I hesitated to reach out.

But, Dad got up and reached for my hand. He grabbed my brother’s hand as well. Soon all of us guys, Christians and Jews, were dancing around that table, connected by blood, by affection, and whatever we call the Oneness at the center of life.