Welcome to the Jewish Grandparents Network. We are delighted you have dropped in.

Join us as we explore new ways for grandparents to play joyful and meaningful roles in our families, to cherish our time together, and to share our Jewish stories, heritage, and traditions. 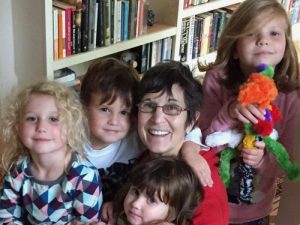 Beyond decades of involvement with her family’s charitable foundations and leadership roles in a number of Jewish and communal organizations, Lee is the creator of Freedom’s Feast, a civics initiative that helps to raise the next generation of citizens through the celebration of our national holidays. She is the past president of her congregation, Chizuk Amuno and author of The Year Mom Got Religion: One Woman’s Mid-life Journey into Judaism. Lee lives in Baltimore and is the proud “Gromzy” to six grandchildren. She loves the company of her adult children, their partners, and a very big, red dog named “Clifford.” 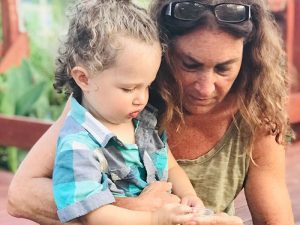 Ilene has extensive professional and volunteer experience in the Jewish community. Ilene conducted the first survey on the state of Jewish preschools in America (2000). She was the Coordinator of the Early Childhood Education Department at Baltimore Hebrew University and currently is adjunct faculty at Hebrew College and Baltimore Hebrew Institute. Ilene was the Director of the Early Childhood Programs at Beth El Congregation in Baltimore. She served as President of the Board of Jewish Education and the President of the Pearlstone Conference & Retreat Center. She is the author of several publications including Untapped Potential: The Status of Jewish Early Childhood Education in America (2002) and Early Childhood Jewish Education “If not now, When?” (2008). 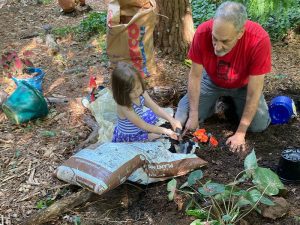 David Raphael is the co-founder and CEO of the Jewish Grandparents Network. A graduate of Albany University and the Columbia University School of Social Work, David spent 30 years in Hillel including roles as Assistant International Director, Executive Director of Hillel of Greater Baltimore and Senior Campus Liaison for Hillel International. David was also the founding Executive Director of the Floortime Foundation and the Executive Director of the Maryland Teen Initiative. David and his wife Jo live in Atlanta, have three grown children, two grandchildren, and Maddie the dog. Contact David at david AT jewishgrandparentsnetwork.org 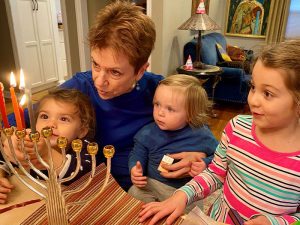 In her role as Director of Creative Partnerships and Project Manager for the Family Room at the Jewish Grandparents Network, Terry collaborates with Jewish organizations to co-create and source original Jewish experiences — storytelling, cooking, gardening, playful learning, family portraits, the arts — that bring grandparents closer to their grandchildren and closer to Judaism. Terry has worked in the field of Jewish education for 35 years, almost all of that time at Behrman House Publishers where she worked closely with educators nation-wide in her role as Director of Educational Services. Terry has also written, edited, or project-managed over seventy Jewish education publications for children and adults. Contact Terry at terry AT jewishgrandparentsnetwork.org

Lisa Feldman Brill: Lisa is an active philanthropist who has been deeply involved in the Jewish community since high school. She is Vice Chair of the Brill Family Charitable Trust, Board officer and executive committee member of the JCC Association, and past president and trustee of the Marcus JCC. Lisa and Ron live in Atlanta and have been lovingly married for 51 years. Her greatest joy is being “grandma” to her two grandchildren!

Chip Edelsberg: Chip has devoted three decades of professional service to synagogue, federation, and Jewish foundation leadership as well as to Board advisory and communal organization consulting roles. A graduate of Brown and The Ohio State University , Chip has a Masters in Teaching and a PhD in Education. Chip and Leslie reside in Scottsdale, proud parents of two sons and four grandchildren.

Dara Grant : Dara has been the Co-Executive Director of Creating Connecting Communities, a local Atlanta non-profit, for the past three years. Dara is a graduate of the University of Michigan with a BBA in Finance and Real Estate, which led her to spend the first 10 years of her career in the real estate industry. Dara and her husband, Andy, live in Atlanta with their three children, where they are actively involved in their schools, synagogue and community at large.

Lee M. Hendler, President: Beyond decades of involvement with her family’s charitable foundations and leadership roles in a number of Jewish and communal organizations, Lee is the creator of Freedom’s Feast, a civics initiative that helps to raise the next generation of citizens through the celebration of our national holidays. She is the past president of her congregation, Chizuk Amuno, Baltimore, and author of The Year Mom Got Religion: One Woman’s Mid-life Journey into Judaism. Lee lives in Baltimore and is the proud “Gromzy” to six grandchildren. She loves the company of her adult children and their partners and has a love-hate relationship with a very big, red dog named “Clifford.”  He is not as well trained as he should be which means that Lee is not as well trained as she should be.

Dr. Ruth Nemzoff: Ruth is the author of Don’t Bite Your Tongue: How to Foster Rewarding Relationships with Your Adult Children, and Don’t Roll Your Eyes: Making In-Laws Into Family. She is currently an affiliated  scholar at Brandeis Women’s Studies Research Center. She was the Assistant Minority Leader, New Hampshire House of Representatives. She holds a BA from Barnard College, an MA from Columbia University, and an EdD Harvard Graduate School of Education. Ruth and her husband have four children and four in-law children and 11 grand children ages 21 to 3.

Suzanne Priebatsch : Suzanne is a Senior Vice President with Morgan Stanley in the Private Wealth Management division. Suzanne specializes in the area of intergenerational wealth management and works with families who value the process of transferring both assets and aspirations from one generation to the next. Suzanne has spoken for a number of institutions, including Hadassah’s outstanding financial education program entitled “Know your Worth.” She is involved with a number of Jewish organizations, including the Jewish Arts Collaborative, the America Israel Friendship League and the Hadassah-Brandeis Institute.

Dr. Marshall Duke: Charles Howard Candler Professor of Psychology at Emory University and a faculty member with The Emory Center for Myth and Ritual in American Life.

Jane Isay: Author of four books, most recently Unconditional Love: A Guide to Navigating the Joys and Challenges of being a Grandparent Today. Learn more at janeisay.com. Jane lives in New York, close to her four grandchildren.

Larry Moneta: Former Vice President for Student Affairs at Duke University; adjunct faculty appointments at Duke in the Sanford School of Public Policy and the University of Pennsylvania Graduate School of Education. Larry has five grandchildren, all of whom call him Grandpa.

Nancy Parkes: Founder and principal of JTeachNOW, an organization that supports education directors and leaders of Jewish organizations seeking to redefine Jewish education in their setting. Nancy is currently pursuing her EdD in JTS’s Executive Doctoral Program.

Terry Rosenberg: Immediate past Chair of the Institute of Jewish Spirituality; board member, Mayyim Haim, Boston. Terry is a grandmother of four.

Devin Schain: Serial entrepreneur with more than 30 years involvement in numerous ventures. Devin is Founder and CEO of Student Playbook. Devin is a dedicated philanthropist: he founded ShalomLearning and Scaling Up Social Sector.

Dr. Jane Shapiro: A founder of Orot: Center for New Jewish Learning where she teaches a variety of classes and workshops blending text study with other intentional practices. Jane is a graduate of the Mandel Teachers Institute and Vision Projects.

Rev. Roger Talbott: A retired Methodist Minister, Roger lives in Jackson Heights with his wife Jacquie. Their son Matt and his wife Melissa live with their two children in Portland, Oregon. Their son Jim has two children and is married to Rabbi Rachel Goldenberg, who leads Malkhut, a progressive Jewish spiritual community in Queens, New York.

What We Believe – Today’s Jewish Grandparent

Grandparents have deep Jewish aspirations for our grandchildren and families.

Therefore: We provide the how and why of Jewish grandparenting through a safe, welcoming gateway for grandparents to enter and explore.

Grandparents play a unique and influential role in our families.

Therefore: We engage grandparents as our primary audience.

Grandparents’ investments will increase when Jewish organizations and communities engage and embrace them.

Therefore: We build highly collaborative partnerships with other organizations and communities.

Home is the place where most grandparent- grandchild interactions occur.

Therefore: We focus on the home as the center of family engagement.

The most rewarding grandparent-grandchild relationships are infused with joy and meaning and benefit both grandparents and grandchildren.

Therefore: We seek to infuse our initiatives and experiences with joy and meaning—and fun and silliness—to surprise and delight grandparents and grandchildren.

Grandparents embrace and support the diversity of our Jewish families.

Therefore: We welcome grandparents from a broad array of backgrounds, cultures, and traditions and celebrate the diversity of today’s Jewish families.

Grandparents become better grandparents when they learn from one another.

Therefore: We build communities of grandparents to support one another and to share and learn together. 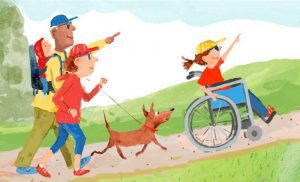 The Jewish Grandparents Network proudly welcomes, respects, and values the participation of all including interfaith families, people of all abilities, religious practices, backgrounds, sexual orientation, gender identity, race, and socio-economic status. We believe that diversity in our families makes us stronger, enriches the Jewish community, and enables us to be better Jewish and world citizens.

Inclusivity is at the core of our mission as a community. We embrace inclusion as a mindset, a way of thinking that opens doors to opportunities for meaningful engagement, connection, and belonging. Together, we can cultivate a more inclusive Jewish community that recognizes the value, dignity, and capabilities of every individual. 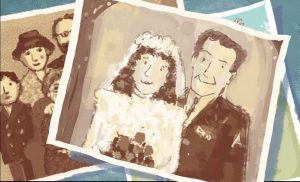 As a nationally recognized community leader and educator, and a mother and grandmother, Lee M. Hendler has long been aware of the under-recognized roles grandparents play as essential members of today’s changing families and as vital links to Jewish traditions and values.

In 2017, Lee shared her thoughts with David Raphael, who was soon to become a first-time grandfather. The Jewish Grandparents Network (JGN) emerged from this conversation.

Through our research, focus groups, and one-on-one conversations we heard of the opportunity to engage grandparents in innovative experiences to help them pursue their complex and essential roles with confidence and joy.

We also heard stories from others that reflected a major gap in the Jewish community. The Jewish communal world had a clear focus on young families but had not yet expanded that focus to include grandparents in meaningful ways. In that gap we saw the need for the Jewish Grandparents Network.

In four years, the Jewish Grandparents Network has become the recognized authority on today’s Jewish grandparents.

We conducted the first National Study of Jewish Grandparents in 2019 in collaboration with 17 Jewish partner organizations. We have engaged grandparents, family members, professionals, and community leaders in a broad array of workshops, initiatives, seminars, and consultations. We see the impact of our efforts not only in our organization’s initiatives but also in the growing number of organizations in the Jewish community that now actively seek to include grandparents in their work.

We believe that Jewish grandparents are major assets for our communities, our families, and the future.

We welcome your partnership.