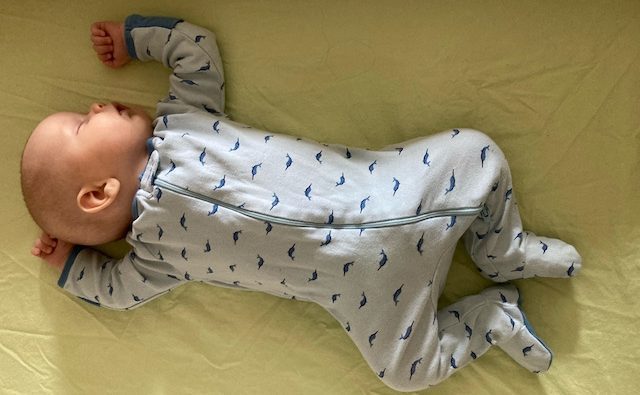 As a child, on nights when I slept at my grandparents’ small home on Thornhill Avenue in Little Neck, New York, Nana Francis would soak me in what felt like near–boiling water and scrub me with a loofa pad until my skin shone a bright shade of pink. Skin smarting, I would don flannel pajamas and climb into bed where a feather pillow and heavy quilts awaited me. Once I was settled and snug, Nana would sing a beautiful Yiddish lullaby as I drifted off to sleep.

These days, when our granddaughter sleeps over or we’re staying at her home, we may watch an episode or two of “Llama Llama” on YouTube, give her a “Bubbie Bubble Bath,” and read her a book or two. Before turning on her night light we sing her a lullaby from our generation. I call these “Boomer Lullabies.”

A favorite is Bob Dylan’s “Forever Young,” written for his eldest son Jesse, born in 1966. The song’s tender lyrics are a folk blessing. Notice the biblical reference in “may you build a ladder to the stars”? Click HERE for the lyrics.


A true lullaby, Loggins and Messina’s wistful “House at Pooh Corner” is another of our granddaughter’s favorites.  Click HERE for the lyrics.


Paul Simon’s “St. Judy’s Comet,” written for his son Harper in 1972, is another favorite. Its sparkly lyrics include a silly jab Simon takes at himself: if he can’t sing his own boy to sleep it would make this famous daddy “look so dumb.”  Click HERE for the lyrics.


Billie Joel’s beautiful “Goodnight My Angel” is suffused with sadness.  The song, written for Joel’s and Christie Brinkley’s daughter Alexa Ray, was written in 1993.  Joel and Brinkley were divorced in 1994. Click HERE for the lyrics.

A less-known favorite is Mark Knopfler’s “All That Matters.” Knopfler, who Boomers may remember as the founder of the band Dire Straits (“Sultans of Swing”), also wrote and performed the scores of several movies including “The Princess Bride.” Knopfler’s father was a Jewish architect whose communist sympathies forced him to flee the fascist regime in his native Hungary. Like traditional Irish lullabies that weave in notes of darkness, Knopfler tells his darling girl she’s “all that matters in this wicked world.” Click HERE for the lyrics.


I love these songs and still remember most of the words. Singing them to my grandchildren links the memories of my past to the joys of the moment. But I also find myself drawn to the lullabies of my childhood. These words from Oyfn Pripetchik speak so beautifully about our passion for sacred texts and the fragility of Jewish life:

Learn, children, don’t be afraid.
Every beginning is hard.
Lucky is the Jew who studies Torah.
What more do we need?
When, children, you will grow older
You will understand,
How many tears lie in these letters
And how much crying.

Remember your favorite Boomer lullabies. But don’t forget those our grandparents sang to us.

Find a list of favorite Yiddish lullabies on Kveller

Send your favorite Boomer and Yiddish lullabies and we’ll post them on the Jewish Grandparents Network Facebook group.

David Raphael is the Co-Founder and Executive Director of the Jewish Grandparents Network, grandson of Nana Francis and Pop Max and Nana Rachel and Pop Jacob, and Zayde to Bina and Hallel.