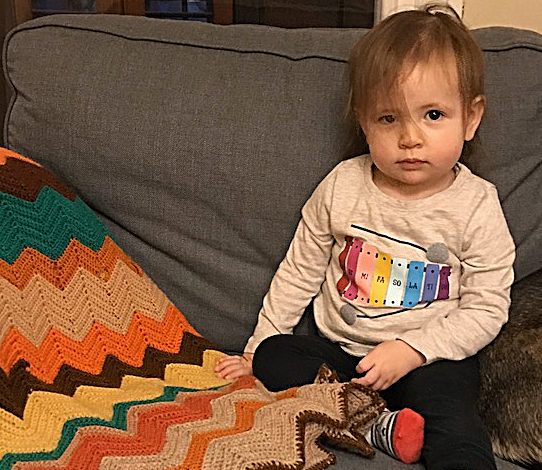 It was the perfectly silly Zayde game.  I covered Bina, my 18-month-old granddaughter, up with the blanket and she’d pretend to be asleep. I pulled the blanket back and she giggled and announced “awake”.  We did this 10 or 11 times until it was time for another game.

But as she climbed off the couch, I realized that the blanket we had been playing with was, in fact, an afghan knitted, over 55 years ago, by Nana Francis, my grandmother, her great-great-grandmother.

Among our tasks as Nana’s grandchildren was to partner with her in the creation of afghans by holding up the hanks of yarn as she wound them into balls. We’d sit on the small ottoman across from her in her lounge chair, two hands raised and moving back and forth as the wool strands traversed the distance between us.  I close my eyes, and I am still there; sitting erect, synchronizing the movement of my arms with the flow of the yarn.

The threads of Nana’s afghan stretch back hundreds of years.  To a Horodenka, in the Ukraine, then part of the Austrian Hungarian Empire; to Francis’s birth in New York 1904.  To Argyle Road in Brooklyn, where two sisters were raised and where the younger “Billie” first met Alvin; to Bayside Queens where a family of three girls and one boy were raised.  The Afghan found its corporeal form, a V pattern of reds, oranges, yellows, and greens, knitted together in a small Cape Cod house on Thornhill Avenue in Little Neck, where Pop Max read the “Fovards” while the knitting needles flew in Nana Frances’ hands.  It was there that eight cousins –laughed, giggled, played tag, Monopoly and the Game of Life; where Nana soaked us in steaming hot baths and scrubbed us with loofa pads.  It listened as we laughed at “Nanaisms”, aphorisms, perhaps from the old country.  Our favorite: “Don’t hold your nose, the smell will go in your mouth”.  But it was also with us when we cried in the days following my father’s death and cried again when Nana and Pop passed.  It was there when we graduated from college, met our wives and husbands and watched in amazement as our own children were born – and when children were born to our children.

And now it has found its way to a row home on Abell Avenue in Baltimore, where my Bina toddles across the floor, listens to Raffi and cuddles with stuffed animals, while I watch her with amazement, delight and, simple, pure joy.

We knit our lives and wrap our children and grandchildren in the cloths of our memories.