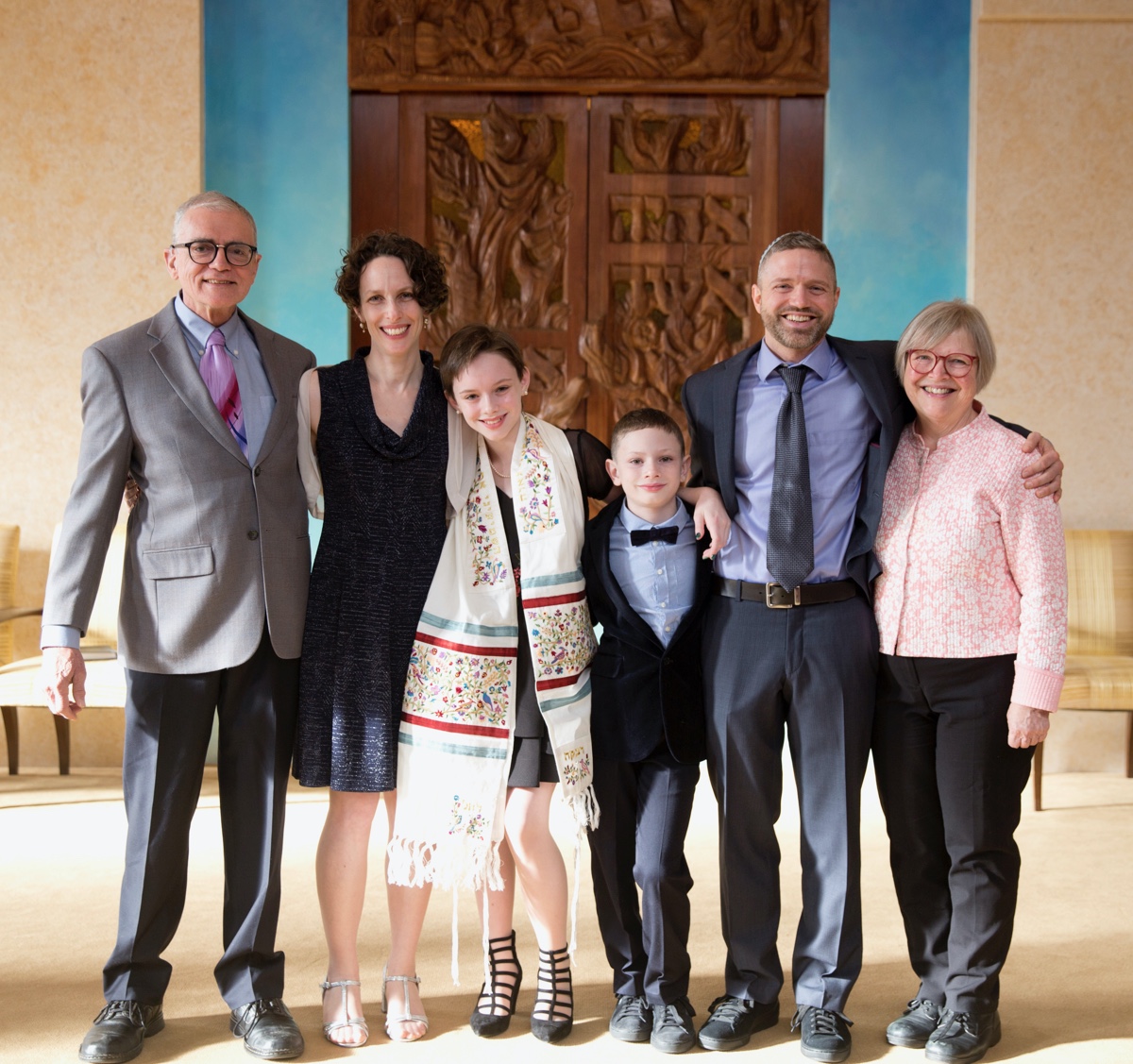 My wife, Jacquie, and I are not Jewish. We are Christians. In fact, I was a Christian pastor for forty-five years and Jacquie and I continue to be active church members. But, like you, we have Jewish grandchildren. Jacquie and I can identify with Lee Handler’s first sentence on this site. This is not the family we foresaw forty years ago.

Our younger son, Jim, like his older brother, Matt, grew up in church-owned houses called “parsonages.” He attended Sunday School. He was part of the youth group. At Columbia University, he became a leader in the main-line Protestant student organization. His organization planned an alternative Spring Break to rebuild burned Black churches in the South. They were cooperating with the Reform Jewish campus group. On that trip, he got to know one of their leaders, Rachel Goldenberg. Rachel was a Rabbi’s daughter who was planning to become a rabbi herself.

Their connection was immediate and ultimately led to Jim’s conversion, to their wedding, and to those two grandchildren.

Interfaith families face special challenges. We anticipated a couple of them, but one was unexpected. I will write about that first.

When Jim told us that he was converting, we were not exactly surprised. We knew his decision came out of something even deeper than his relationship with Rachel.

I sometimes joke that I blame Chaim Potok. When our boys were young, we read books together as a family.

We began with C. S. Lewis’s The Lion, the Witch, and the Wardrobe, and moved on to Tolkien’s Lord of the Rings Trilogy. Along the way we read Chaim Potok’s The Chosen and The Promise. In some ways, their Orthodox Jewish world in Brooklyn was as exotic to our family living in a Cleveland suburb as Narnia or Middle Earth. The difference, of course, is that there really are people who gather for worship on Friday night instead of Sunday morning. There really are people who wear kippot and tefillin when they pray.

Whether that caught Jim’s imagination or stirred something deep in his soul, I don’t know. But, his mother and I knew in our hearts that his conversion was not a rejection of us or our faith. It was, instead, a path he needed to follow.

Neither of us lay awake at night worrying about Jim’s eternal salvation. That’s the challenge that a lot of Christians think we should have because our son converted. I have complex theological reasons why I don’t worry about it. But, I prefer Jacquie’s: “I can’t believe in a God who would want me to stop loving my son because he became a Jew. Besides, SHE wouldn’t do that.”

We discovered the real challenge when Jim asked us to read Choosing a Jewish Life, by Anita Diamant. Early in the book, she has a section called “Holocaust.”

In the first paragraph, Diamant said that the convert takes on the Holocaust and the whole history of anti-Semitism. She ended that paragraph with a story of a young woman studying for conversion who was having second thoughts. She told her discussion group that she was having nightmares about being pursued by Nazis. She said, “What right do I have to subject any children I might have to that kind of danger?”

Jacquie and I had grown up in the 50’s and 60’s as the stories of Anne Frank, Elie Wiesel, Primo Levi, and so many others were being published. We were moved by these stories even when they were sentimentalized and popularized in movies and on TV. Their stories horrified us and even made us cry, but they were not stories about us.  We asked ourselves if we would have the courage to hide Jews. But we and our loved ones would not be in danger otherwise.

As white Protestant Americans, we had never experienced the heart-gripping fear of anti-Semitism, until Jim converted. That fear hit us only a few days after we read Diamant’s book. A man fired 70 rounds into a Jewish preschool in California with a semi-automatic rifle. He wounded five people, including three children.  Jim’s conversion meant that could happen to our grandchildren.

The late 90’s, a half-century after the camps were opened, now look like a period of idyllic safety. In 2017, we saw the Unite the Right rally in Charlottesville. In 2018, came the massacre at the Tree of Life Congregation in Pittsburgh. This year we have seen more attacks on synagogues and Jewish people in New York City, where Jim’s family and Jacquie and I now live. That keeps the fear of anti-Semitism clenched in our hearts.

Our two other grandchildren are also growing up in a country that has made the ownership of high velocity, quick-firing military-style rifles a “right.” After the Newtown massacre, we know that even first-graders can be targets of murderous hatred. So, we fear for them, too.

We accept the fact that life has risks and love means our hearts break when anything happens to our loved ones. But, Jacquie and I did not realize until that week in August 1999, that we had a new vulnerability. The fact that some people may hate our loved ones simply because they are Jews may not make us Jews, but it does make us Jew-ish.