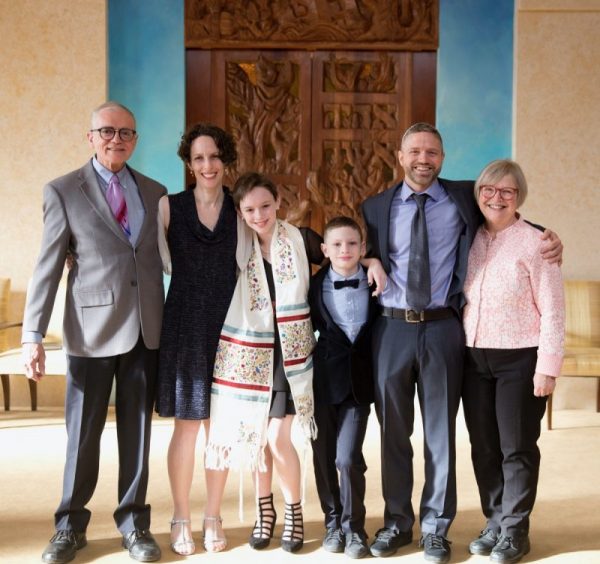 Nov 22 2021 Making Room For Each Other In Interfaith Families

“Grandpa, will you get your ice cream in a dish or in a cone?” my then-seven-year-old granddaughter, Amina, asked.  We were walking to the ice cream parlor in the little town in Connecticut where her mother was the rabbi of the local temple.

I was taking a break after the intense Lent and Easter schedule at the Ohio church where I was pastor. I was doing what grandparents do, taking her and her little brother, Ziv, to get ice cream. I said I would get my ice cream in a dish.

I knew it was still Passover at their house. Matzoh had been on the table at dinner, but I did not know that ice cream cones were Chametz. In fact, I only learned the word Chametz well enough to use it when I began writing this article.

That small exchange illustrates one of the poignant problems facing our interfaith family. One of the joys of being a grandparent is sharing family and cultural traditions with your grandchildren. But, what if you don’t share traditions?

Maybe it’s easier for families that are not very religious. But, both of our families take our religious traditions and teachings seriously.  How do we come together?

We need to practice hospitality. Abraham and Sarah started it by entertaining those three strangers. To paraphrase the Roman Catholic writer, Henri Nouwen, hospitality is making room for others to be themselves.

Bad hosts think everyone is exactly like them. We once spent a casual evening with a couple who had ordered pizza before we arrived. It came with anchovies. I ate it pretending that I like anchovies. I couldn’t be myself because our hosts assumed we were anchovy-lovers like them.

At seven, Amina could be excused for thinking her grandfather did not want his ice cream in a cone because he was keeping Passover. Why else would someone forego the pleasure of ice cream in a cone? But, it took several years for Jacquie and I to realize that Hanukkah is not “Jewish Christmas.” Yes, Hanukkah is fun and involves candles and some catchy tunes, but it is not the religious/cultural/economic blowout that Christmas is.

A good host says (and means), “My house is your house.” A bad host makes you feel like an intruder in a thousand thoughtless ways.

Jacquie and I now realize that we have had the privilege of living in a country in which the culture and its institutions support our faith. Even with a constitutional guarantee of separation of church and state, Christmas is a federal holiday. In our 24/7 work culture, most people still have a day off on Sunday.

So, like fish trying to see water, we are not always aware of the ways we crowd out our loved ones. Once, at a gathering of my extended family, I said a prayer before the meal. Afterward Jim said to me, “Dad, it is hard for us to pray in the name of Jesus.”

I did not even know that I had used the phrase. It had become a mindless ritual like the “Amen” that follows it. In a sense, I was saying there was no room at that table for them. I was thoughtlessly following a tradition going back to the Gospels. But the Gospels were written before the name of Jesus was used to justify pogroms, the Holocaust, and our annual phony “War on Christmas.”

Nevertheless, many would argue that, since the majority of people at that table were Christians, Jim should just suck it up. It’s the same reasoning that puts manger scenes in front of City Hall. It is why Rachel, the Rabbi’s daughter, had to sing Christmas carols at her high school’s Christmas concert.

Like bad hosts who don’t think about their guests, the majority never thinks about the minority.

Meeting at the Space Where We Can Be Ourselves

Our two religions do not have to be barriers. When we give each other room to be ourselves profound meetings can happen.

For example, I recently had dinner with my grandson, Ziv.  We talked about navigating Middle School and studying for his Bar Mitzvah. Ziv and I share a lot interests including the Marvel Universe and Greek myths. He had just read a graphic novel about Achilles and the Trojan War. He was disgusted with the story of Achilles dragging Hector’s body around the walls of Troy. Why would he do that?

We discussed the Ancient Greek code of honor. Honor, as Achilles understood it, not only depended on him winning, it also meant the loser had to be humiliated.

I asked him what he was learning about Jewish values that were different from that.  We talked about righteousness.  What does it mean to be in right relationship with God, your neighbor, even your enemy? We also talked about which of these value systems seem to have the most influence on our culture today. We agreed that when people follow Achilles, they do pretty stupid things. When people follow Moses or Jesus, they make much better decisions.

So, that’s my task as a grandparent. My grandchildren are growing up as part of minority in a culture that does not make room for them. Jacquie and I believe that our hearts and our home need to be places where they can be themselves. That includes the fact that they are Jewish.