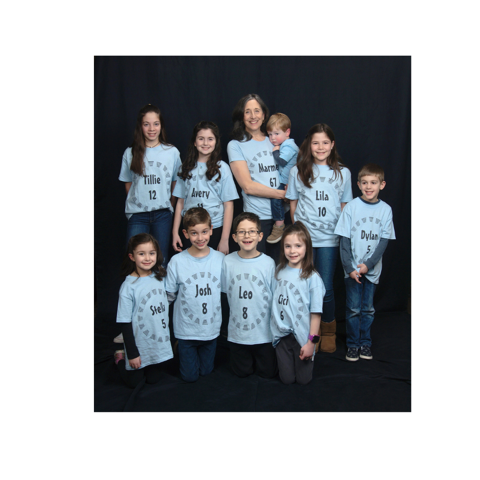 Sep 04 2020 Influencers Are Everywhere, Not Just on Social Media

You become who you hang out with, or put more humorously, “funny how much better we understand the Jell-O when we’ve seen the mold.”

To My Beloved Grandchildren,

You are too young to remember the comic strip, Cathy. It was drawn by Cathy Guisewite and ran in newspapers from 1976-2010. The mother/daughter relationship was a frequent topic in the cartoon, and my favorite punchline from Guisewite is this: “Funny how much better we understand the Jell-O when we’ve seen the mold.” Of course, we are molded by more than just our mothers, so today I remember six people who influenced the person I am today. 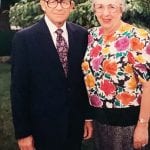 Your great-grandparents, Rose and Morrie Kleiner

Rose Kleiner was my mom, your great-grandmother. She was very effective in the world. She got things done. She ran our four-person household with ease. Even a winter day with frozen pipes in the kitchen did not faze her. She cooked dinner as usual but washed dishes in the bathroom. She let stresses like frozen pipes “roll off her back.” Her most often stated beliefs were that “it’s always something,” and that in life there was “never a dull moment.” Mom and I would sometimes butt heads because I took an emotional slant on all issues while she took a practical one. I am beginning to see that as the main-momma for my kids and grandkids, strength is a good image to project.

Morrie Kleiner was your great grandfather. He was a marshmallow of a man, famous for the “love squeezes” he gave his grandkids. He was a hugger, not a fighter, and his sweetness was loved by all. Dad had a blood disorder that caused him to need transfusions regularly. When the problem started, those transfusions occurred every few months. Towards the end of his life, they were every couple of weeks. PICC lines, visiting nurses, blood draws, etc. were a big part of his life, yet he never complained. Instead, he said, “Everyone has something. This is mine.”

I tend to smoosh their philosophies together to come up with my own notion. Not only is it always something, but if it weren’t this it would be something else, so deal with the situation at hand, and be happy it’s not something worse. 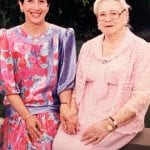 He am I with your great-great-grandmother, who I called “Bubbie”

Mary Willick was my maternal grandmother – your great-great-grandmother. That one time I ran away from home at age six, I went to her house,exactly one mile away. From elementary school through my first job as a college graduate, I often went to her house for lunch – a plateful of potato latkes and milk served in a coffee cup. I adored the woman. She was the one I turned to when I dropped out of that too-far-away-from-home first college. I was afraid of what everyone would say. Her advice? Take what others say “to foot.” Listen to them politely, and then walk away. 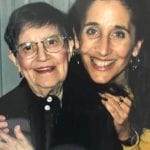 Here I am with beloved Auntillie

Auntillie was my dad’s sister, your great aunt. She called herself “Auntillie,” all in one word, while we called her “Tillie Next to God” because she was so special.  She was a people person extraordinaire. They say there are only six degrees of separation between individuals, but that wasn’t true for Auntillie. She not only knew everyone, but she stayed in touch with everyone. In my mind’s eye, she is sitting at her kitchen table, hands poised above her Royal typewriter, composing letters to loved ones out of town. I once asked her how to stay in touch with a relative who was a pain in the rear. This person never called me, yet when I called her, I couldn’t get off the phone. Did I really need to hear – in detail – about this relative’s hairdresser’s sister-in-law? Auntillie told me it was indeed important to call that relative! Just not very often.

It is validating to note that both of these family members – women who were greatly loved and admired – had a game plan for difficult people. Smooshing their philosophies together, I allow myself to walk away when necessary, while never walking completely out of range. 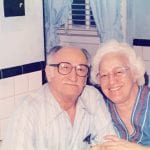 My long-ago lunch partners and your great-grandparents, Sylvia and Sol Eckert

Sylvia Eckert was my mother-in-law, your great-grandmother. OK, so we didn’t always get along, but I think of her often because of that day, long ago, when I was newly married to her son. She stopped by my house to ask if I wanted to join her and my father-in-law in going to the deli for lunch. I turned her down! My plan for the afternoon was to wash the kitchen floor! She calmly explained that the kitchen floor would always be there to wash, while an invitation to do something fun was not always available. I liked that philosophy – and the bagel, cream cheese, and lox I ate that day. 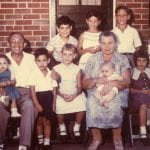 Your great-great grandparents, Mary and Sam Willick, with me and some of my fellow candy eaters

Sam Willick, your great-grandfather, was another purveyor of joy. My Grandma and Grandpa’s duplex was only four or five houses away from the corner market, which had a counter full of penny candies. After Friday night dinners at their house, Grandpa would reach into his pocket and pull out what seemed like a HUGE handful of change. My cousins, brother, and I were allowed to take it all, and spend it all, and eat all that candy…as long as we also bought the evening newspaper for Grandpa.

Both stories are wonderful reminders to find the JOY in the JOurneY.

I hope you liked my stories, and that you are now thinking. “I’ve got lots of stories like that!” If so, the Jewish Grandparents Network would love for you to write them up and submit them as a “Pop Up” story on the website.  Click HERE to learn more!

Also, please use my short, short story format as a meaningful activity when you FaceTime or Zoom with your grandkids. They can tell stories about favorite people and you can too! It will be an eye-opener for grandkids old enough to be on social media to think of family members as “influencers”! Want to include photos as well? A free app called PhotoScan will put old photos into your phone! You can easily send them via text message to the kids.

Lorie Kleiner Eckert is the grandmother of ten kids, ages 3-14. She is also an author, blogger, book reviewer, and quilt artist. You can follow her creative endeavors here: https://www.loriekleinereckert.com