Menu
DONATE
<< Back to Family Room

“And Mordechai wrote down these things and sent missives to all the Jews who were in all the provinces of King Achashverosh — near and far — to inform them that every year henceforth, they should make the fourteenth and fifteenth days of the month of Adar days of banqueting and rejoicing, and sending portions of food to each other and gifts to the poor…” (Book of Esther, Chapter 9, verses 20-22).

The festive holiday of Purim begins Wednesday evening, March 16, 2022. As the sun sets, Jews around the world — young and old alike — will dress up in costumes and listen to a tale of palace intrigue. The story recalls the courage of Esther, who, with the help of her uncle Mordechai, outsmarts Haman, the wicked royal vizier who plotted to kill the Jews of Persia.

Traditionally, there are four rituals (or mitzvot) for observing Purim. 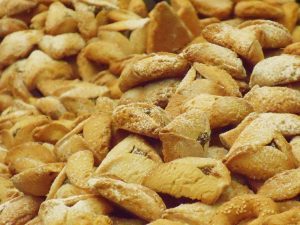 1. Days of Banqueting and Rejoicing

On Purim day, Jews celebrate the holiday with a feast at home — called a se’udah. Some people invite friends and family to their homes for a joyous meal filled with their favorite foods, especially hamantaschen. Vegetarians and vegans enjoy citing the Book of Esther as an authoritative source for their meatless diets. The Bible makes no mention of what Queen Esther ate while she was in the palace, but rabbinic commentators assumed she avoided non-kosher foods by eating lentils and beans.

2. Sending Portions of Food to Each Other — Sh’lach Manot or Mishloach Manot

One of the most enjoyable customs of Purim can be making food baskets filled with sweets, baked goods, and assorted snacks and foods. Families deliver the baskets, called mishloach manot, to friends and relatives, or to members of the community who live in nursing homes or senior residences. This custom brings members of the community closer together and can cultivate warm, intimate relationships. 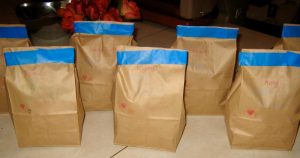 It is customary to give tzedakah every Shabbat and holiday. Giving gifts to the poor on Purim, however, is different because we give not only out of a sense of righteous justice, but also to spread the joy of the holiday. Some families deliver food and other supplies to a local homeless shelter or food pantry.

The heart of the Purim celebration is dressing up in costume and hearing the story of Purim read or chanted. Like spring festivals in other cultures — for example, Mardi Gras and Holi — the atmosphere in the synagogue is joyous, raucous, and festive.

Rabbi Mark H. Levine serves in the role of Jewish Educator at the Jewish Grandparents Network.