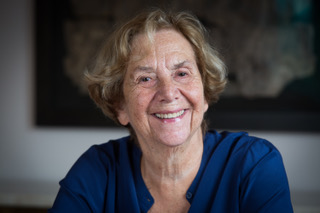 It goes without saying that we love our grandkids. And we want them to grow up to be good people, open to others, accepting of differences, wise, and brave. I call this the moral imagination, and when we just hang out, love them, play cards, and schmooze—that is when we help build their character. Ballet performances and gifts don’t nurture the moral imagination. The time we spend with them does. I think there are four pillars to the moral imagination: empathy, perspective, knowledge, and agency.

Empathy grows from the sense of being loved and being lovable. We all need to be understood and accepted. Who does that better than a grandmother who gives a quick hug when a child looks downcast? A grandpa’s nod encourages a child to say what he thinks. Empathy keeps us from demonizing strangers. It opens our hearts.

Granda lived with his daughter and her ten children. Even in that chaotic setting, Granda welcomed each of them into his room when they came home from school.  A quiet chat, a cookie, and five minutes of perfect attention. He listened to them, and sometimes he acted on their behalf. They all remember and are grateful.

Perspective comes with the grandparent package: we have lived a long time: our history, of the flow of our lives, the good times and the hard times. Children live in the moment. We embody the ups and downs of life because we have lived it.

African-American grandmothers who experienced the Great Migration north, tell their grandkids about how they survived Jim Crow in the South. They did survive, the kids notice.

Grandparents who have lost a spouse show their grief—and they survive.

We grandparents model resilience and decency, in a confusing and troubled world.

Knowledge is richer than fact. The grandkids may be able to Google everything, but we offer context. When my 12-year-old grandson asked me what it was like to live in Washington. DC during World War II, I told him about air raid warnings. And then I mentioned how much we hated the fact that Washington was a segregated city. “That’s impossible,” he said. “Washington is where Abraham Lincoln lived.” That’s the difference between textbook learning and knowledge.

When we cook with them, or play games with them, or do woodworking with them, or teach them how to sew, we encourage their sense of agency—their ability to do things on their own. Abby’s in-laws raise goats. The 12-year-old twin girls visit the farm and know all about the care of the goats. So, when grandma had shoulder surgery, the twins stayed at the farm and cared for the goats. They stand straight when the discuss goats, and they gained confidence in their ability to take care of grandma.

Grandchildren grow strong and straight in the sunlight of our love. They feel better about themselves, they come to understand a little bit about hardship and resilience, and they gain confidence.

So next time you’re feeling a little too tired to schlep them somewhere, remember that just hanging out is a magnificent gift to their character.

Jane Isay is the author of four books, the most recent of which is Unconditional Love: A Guide to Navigating the Joys and Challenges of being a Grandparent Today. You can learn more from her website, janeisay.com. She lives in New York, close to her four grandchildren.